Ruth Masters, born at St. Joseph’s Hospital in 1920, is a beloved local activist who has mentored many generations of environmentalists.  She is legendary for her countless battles to save properties from the ravages of development – from Strathcona Park to Clayoquot, and from MacDonald Woods to Seal Bay,

Ruth was there, protesting in the name of “civil obedience”.

Her actions and campaigns have taken bravery and determination, but Ruth is always one to think of others. In 2004, she gifted 18 acres of her property beside the Puntledge River to the Regional District, as a Greenway and Wildlife Corridor.  She has a raucous sense of humour, and has bestowed over 100 deserving people with “Hero Spoons” for their own good works.  Ruth lives in the home she built with her parents in 1956, on the edge of Masters Greenway. The interview was conducted by Melanie and Makayla on March 7th, 2014. 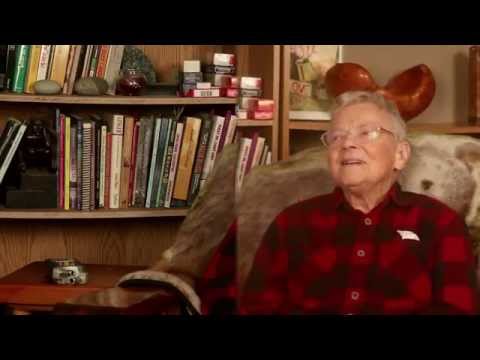 My name is Makayla, and this is Melanie.  Thank you for doing this interview with us today.

I won’t volunteer very much but I’ll answer any questions you ask me.

What first inspired you about the environment? What sparked your interest?

Well, I belonged to the mountaineering club, and we had regular trips all over the place and just being here, the river was the centre of our activities. We were church mouse poor and living just down the road from where I live here now, so it was a real event to get to Union Bay, and if we got to Hornby or Denman Island it was like going to New York, practically.  So let’s say I had a very modest start in life.  I’m here!

What are some of your favourite places in nature?

Oh, parks and wilderness, and protecting them is the main thing.  There wouldn’t be a stick standing in a lot of these beautiful areas if we hadn’t been ready to defend.

What has it been like watching the environment change around you?

If there’s a buck to be made it won’t be there very long, that’s the general principle of the place.  You can quote me on that if you like!

What kind of process would you go through to get a protest or campaign started?

I never have had to.  I wasn’t the leader, I was just the backup.  I usually just get a phone call, you know. “Ruth, the chain saws are in there”, and I’d get rushed out there to get arrested if necessary, or stand there and make a nuisance of myself. I’ve been in the police car a number of times and so on, but I’ve never been in jail.

Was it ever scary to stand up and be the voice to oppose something?

Not really. Being old is rather an advantage, because when you’re naughty they really don’t know what to do with you. They go to grab and I say “oooh, my arthritis!” and I get let go of fast.

Can you describe your first campaign to us?

That would take a bit of thought because I’ve been on any number of them.  I think out on the West Coast was one of the first ones I ever attended, out at Meares Island and so on.   But they’ve taken my truck away so I can’t get there fast enough now.  It was my own doctor who did it to me, actually. I was parked in his parking lot. The truck rolled a little bit when I started up, and I nicked the tail end of his car and he asked that I be tested. Well, from there on it was all downhill, because once you’re a senior they can’t wait to get you!

But oddly enough, when he was a little boy, they asked us to take some of these fatherless little boys on a hike with us, and one of them was Stephen Matous who is now a doctor in town. And this kid Stephen fell into a wasp’s nest, and instead of getting up and out of there fast, he landed on top of it and tried to cover his head up. A fellow from down island ran in from one side and I came in from the other, and we were picking wasps off this kid as fast as we could move. He was badly stung but neither of us got stung – but whenever I saw him afterwards I would always say, “remember that wasp nest, Steve”.  That was my downfall.  He’s my doctor – the one that asked I be tested when I nudged his car in his parking lot.

I lost my licence and so I finally sold my truck. It was a useful vehicle – I used it to rescue stranded motorists, and I went down every month to haul meat scraps from the butcher shops that they were turfing out, packages of perfectly good meat except past date, so I had that as a service and now of course I lost my truck. It’s too bad, but just the way the ball bounces, I guess.

Did you ever face any feminist issues? Were you ever not taken seriously because you were a woman?

Not taken seriously? Brushed off, I’d say, yeah sure, plenty of times, but it doesn’t bother me.

What does it mean to be Canadian?

Well, you do get a little respect globally because of it.

I just stand there and say “nobody tells ME not to look after Canada” – and I know how I felt when I thought I’d seen the last of it, or it had seen the last of me.  I’m a war veteran, of course. I don’t usually admit it because people look at me like I’ve been around since the flood – I was in the London bombings, I had 17 months of city bombing.  When I came back they let us off at Quebec City, and I climbed up to the top of the roadway there and I stood there and I pronounced, “I’m awfully glad to be here. I’m glad to be anywhere!”

What made you decide to go to war?

War was already declared, and we had a Women’s Service Corps. We learned how to march and drill and all that stuff, and then they were recruiting women and I joined the Royal Canadian Air Force Women’s Division. There were hundreds of us altogether. We drilled and marched and we were service women. I haven’t any regrets.

I had 17 months of steady bombing. There were hundreds of people killed in London and the south of Britain while we were stationed there, and when we went to bed at night we never knew if we’d be waking up in the morning.  When we got to work, we’d do a hasty check to see that all our friends had come in, and somebody would come in a housecoat and slippers having lost everything they owned.  I got so that I could sleep through a bombing raid quite often – I explain to my friends it must be because my conscience was so clear and my thoughts so pure – and I can see the flashing eyes as this woman screamed at me, “It’s because you’re too dumb!!”  I didn’t make any points on that one.

But I was never hit nor hurt. I lost hundreds of hours of sleep, of course.  I had what I called my exit routine. I didn’t run to an Air Raid shelter.  It was too far to go. I’d have a pillow over my head and one under my head, and my knees up to my nose and when I heard the bomb screaming in, I’d say, “well, if this is it, no regrets, here goes” –then I’d hear the bomb down the street and know somebody else got killed.  It wasn’t your average overseas vacation.  So here I am, fifty years later, still bitching.  I must have done some things right.

I get Veteran’s benefits now so I often think, “thank god I went to the war”!  Saved this property.  I was able to get the financing as a war veteran, and as I say I was never any flaming hero.  I thought I was going to be seeing the pearly gates ahead of time on many occasions.

How many years have you lived in the Comox Valley? Were you born and raised here?

I was born at St. Joseph’s. I was one of the first. They just opened the hospital and I was one of the fairly original patients, shall we say.  I’ve only been away about ten years altogether in my lifetime. You know how old I am, do you? I won’t tell you if you don’t ask!

What else do you have on your mind? Don’t be scared you’re going to embarrass me!

What is your oldest memory of your childhood?

We were very poor. We just lived down the road from here. One memory I have, for a while there my mother and I only had one pair of shoes between us.  And while I was at school in the shoes, momma had some sawed-off gumboots that she padded around home here while I was at school. And this one day I plodded up Lake Trail, wearing the shoes, and I could see momma coming in the distance in the sawed-off gumboots – and at the corner of Lake Trail and Powerhouse Road we exchanged footwear.  Momma went to town in THE shoes and I plodded home in the sawed-off gumboots.

That gives you an idea we weren’t exactly rich – but the property just down the way here, my father got it after he got back from the First World War. We always had a roof over our heads, but it was a very modest roof.  It wasn’t exactly a palace, I can tell you. You could always tell what season it was by how empty the outhouse was.  Let’s say I had a very modest start in life but it didn’t affect me too badly and, as I say, I not only went to the war but I got back from the war.