Maureen Glowasky is a fourth-generation Courtenay resident and a member of the Morrison family, thanks to whom we have the Roy Morrison Nature Trust. In this interview, conducted by students Hailee and Melanie, she describes her childhood years in the Lake Trail neighbourhood, and vivid experiences of life in Bevan, Camp Three, and the 1946 earthquake. Maureen’s warmth and good humour shine throughout. 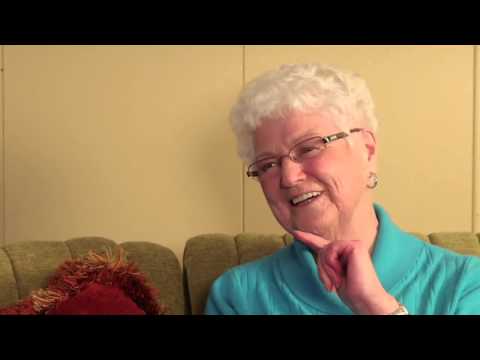 So, where were you born?

How did your first family member come to the Comox Valley?

My family came from Ireland, part of it – I have quite a family that has been in Courtenay for a long time.  My family on the Morrison side, from Ireland; on the McQuillan side, Ireland.  My grandfather Morrison was a prospector – he went up to the Yukon, then settled here in Courtenay.  And my grandmother was a McQuillan, and she was about one month old when she arrived in Courtenay.  And the rest of the family was born and raised here.  And on my mother’s side, her mother was born here in Courtenay also, and her mother was the midwife in Courtenay – up on Hardy Road.  And my grandfather, on my mother’s side came from Prince Edward Island, and his family was there for generations on Prince Edward Island, but he was about 12 years old when he came to Hornby Island.

Why did they come here from Ireland?

I remember being told a few things by my grandmother – but you don’t pay much attention.  A little bit about her being born in Cleveland, and how she was one of the first to come over the Rockies, on the railroad track.  In the engine, because there was no train then. It was just one of the first trips.

You mean after the Last Spike was put in?

That’s what I gather, yes.  She was a month old when she arrived here in Courtenay with her parents, and they wagoned it up to wherever they could catch the train.  And they settled in Courtenay, and started a potato farm here. Of course, Irish and potatoes – it seemed to go right through the family!

What type of chores did you have to do when you were a kid?

Well, I think we were badly spoiled, because I don’t remember having to do too many chores until we were in the teens. Just dishes.  Every once in a while we had to go out and get the wood. But, living on Lake Trail it was not much of a house, it was more like a cabin. There was blankets on the doors, a porch.  And there definitely was an old outhouse – no bathrooms, so we had to chug ourselves out to the one-seater. [laughs].  I was probably five years old there.

Then we moved to the logging camp, Camp 3 at the end of End-All Road, and we were there for a few years. And we moved again to Grantham for a short while, to a farm. There my mother was quite happy to do all the chores.  And there were chickens, cows… pigs that  got away, ran away.  That was in 1944, I believe. Then in 1945, we moved back to Courtenay, into the family home, which we called Shackey Acres.  Because it was a shack, not a built-up house – it had been put together, bit by bit.  We spent the rest of our teenage years there.

Living in Camp 3 was quite an experience, because it was all through the war.  We were on End-All Road, and the old logging camp was taken over by the Army.  They had their planes going over, and trucks going down past, and troops going through. Sometimes going home on the bus, we’d have to wait for the men to march past, and the trucks and jeeps to go by, and then we’d get home.   We often had some of the Army guys come around to the farm for something home-cooked. The fellows from back east were called the “Zombies”. We didn’t know what zombies were, but we found out they were men who were conscripted, so they weren’t allowed to come onto our property. But the others were. It was quite something to be walking down the road, and suddenly you were scooped up on an Army truck, because they were flying over dropping sandbags. It was all the training in Camp 3.

Now, this was called a Pupil’s War Savings Passbook.  When we were in Camp 3, they wanted to gather a lot of steel and tin for the war effort.  One boy, I think his name was Norman Orr, we decided we’re going to get ours too. I was only five. We worked hard to gather up our little pile of tin and steel, and whatever we could, and we were going to share the money. And when it came time to collect the money, because I was a girl, I got no money. But the boy got the money.

Why did your family move around quite so much?

I think it was my mother that kept us moving. Outside of looking after us kids, she needed to be motivated – so, being of a family where they grew vegetables and had a farm, she grew up having cows and chickens, and the place on Lake Trail didn’t accommodate that. My dad worked for the Comox logging, so they had to go wherever the logging was. Living in a logging camp, there was no gardens to grow if you’re temporarily there.  A lot of the logging camps were put in-between stumps, so for a garden there was no way, and no way to have animals.  In Camp 3, everywhere you went was stumps. So she started looking for property where she could grow, and have a farm.

And when they rented the place on Grantham, she went to an auction and came home with… a cow. Which we called Tilly. Oh, actually that was Nilly – got the cows mixed up!  She just loved her milk cow.  So they decided they’d have to find a place to raise that cow.  That’s how we ended up on the farm on End-All Road.  There we had cows, named Soup and Stew, and turkeys, and geese, and she didn’t want geese because they were messy.  The turkeys were wild, they were away all summer and would come back in the winter.

It was a great time for us. We used to pretend we were camping out, get the blankets and sleep overnight in the barn, that was our fun. There was a creek, Black Creek, at the back of the property. We could swim there all summer, but we had to be very careful. There was a lot of land clearing. More potato growing. We never got away from potatoes. We were there about three years, and she decided she’d had enough of farming.

And down where Thrifty’s is now, that was the school.  Actually, my dad started in the little school that was built there, and I was the new school from grade 5 until grade 8.  And then my oldest daughter, Elaine, she started in that school the year they tore it down!

When we moved back around Lake Trail I was 12 or 13.  I never went too far up Lake Trail, but going down was Obbie Bell’s place by that time.  We used to go to town through the little field down from us, through the trees and my grandparent’s place where the school is, grab an apple off the trees going down the hill, beautiful King apples. And the pigs were all in there.  And carry on to school – it was a shortcut.  It was better than walking up the road, especially in the dark. There was no streetlights, and there was gravel.

And my grandparents did have peacocks. Have you ever heard peacocks yell? Well, walking up there in the dark, and a peacock yells, it sounds like somebody yelling “help” – well, you run like heck (laughter). Scared me silly.  It was a quiet neighborhood. And very dark.

Well, in Camp 3, it was grades 1 to 8. There were the little ones to the bigger ones. It was a wood stove – actually, more like a barrel stove in the middle of the classroom.  In grade 1, each class had to get up and do their talk and their spelling at the back of the room while the others studied. And the little school in Grantham, it was a bit different, because the teacher had what was called a “beaver stick”, and I was terrified. I got up to put something on the blackboard, like adding – I didn’t know whether I was supposed to write something down, I haven’t a clue.  There again was the wood stove, and I think the boys brought the wood up, it was piled under the school there. And Headquarters School was the same –  grades 1 to 4, and the outhouse, there’s the girls, there’s the boys – and wood stove, and cloakroom, where you piled up your coats.  Thank goodness, because sometimes it was really cold.  And when I got to Courtenay school I was in awe, from the little schools to the bigger school.

In the summer, what did you do for fun?

Oh, we’d go fishing, we’d go camping – my mother was a great one for being outdoors. We played all winter, too.  But summertime, we spent a lot of time at Miracle Beach, it was called Elma Bay at that time. Camping, we didn’t take much with us.  We took a canvas, we took one blanket, and half the time, we’d run out of food.  But my dad usually came up, with the food.  We’d gorge ourselves, because we couldn’t keep meat or anything.  No coolers, nothing to keep anything in.

And we did a lot of picking of blackberries – those little wild ones, have you ever tried them? You haven’t tasted a blackberry unless you’d have one of those wild ones.  They made the best jam. But the only time you could get them was when the forestry had their slash-fires. They do not have the fires now to have the good tasting blackberries, to have a good fire go through.They were just beautiful berries. We’d take a round tin bathtub with us, or the copper ones we used to have our baths in when we were little – and fill them with berries and come home, and my Mum would spend the rest of the time canning blackberries, beautiful berries. And we would go fishing. And sometimes my mother would take us panning gold up the Oyster River. That was our summer until I had to work.

Did you have a special fishing spot for your family?

Oh, we went up Oyster River most of the time to go fishing.  But my dad had a boat, and we used to go out from Miracle Beach, Elma Bay as we called it, and fish from there. Used to go clam digging, but that was more in the fall or the early spring. Sometimes I’d go out with my dad, he was a logger and he had his own logging truck. He fired me my first time. I was a “whistle punk”. I got the signals all mixed up, so I sort of got fired by lunchtime. On weekends, we’d be out playing hide and seek, and throwing the ball over the roof, anti-anti-eye over.  Each person would be on either side of the house, and we’d throw the ball over, and try to catch it. We would do that till dark. The neighbour across the way, Sandberg, she called us the “Wild Indians”, because we were playing all the time.

No TV to keep us occupied!