Anne Minard was born in 1926, and moved to the area 40 years ago.  She represents the second wave of pioneers  – the draft dodgers, hippies and back-to-the-landers that mingled with loggers and farmers to make up the Comox Valley’s diversity of today.

As a child, Anne emigrated from England and a traditional farming background.  She left school at age 14 when the war broke out, but returned to school at 40 to become a social worker for youth.  She was also a key organizer of the local Renaissance Fair, and her son Jack works with Tsolum Restoration,  which this year showed record returns of salmon to the Tsolum river.

Anne is an energetic character!  She also recounts her 2004 cross-Canada adventure in a veggie-powered diesel bus, to visit the Newfoundland dock where her family first landed in Canada.

The interview was conducted by Terran and Amber. 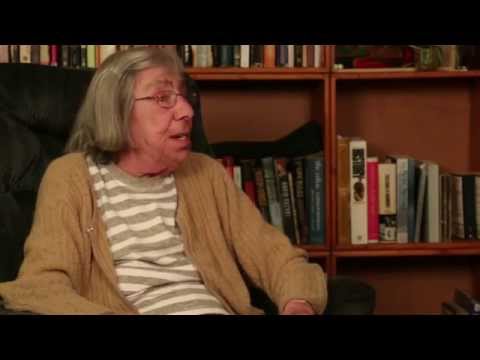 How did you first come to the Comox Valley?

In a Volkswagen Van!  I came from Victoria.  We were part of the “going back to the land movement”, and we bought property at the ‘Hermie’, in what people called Merville and I call Headquarters. I was a farmer when I first came. I had a horse and a cow and a goat, and a huge garden and a little field and stuff.

How were you received when first you came here?

Everybody else came too, is what I can say. Courtenay was a very little town and a sleepy, dull little town!  We thought Campbell River was hot in comparison, back in those days. We had a fish boat, though, and we spent a lot of time in Campbell River. That didn’t last long. We sold it.

You described yourself back then as a “late-coming hippie”?

Well, I was a late-coming hippie. I was 20 years younger than the hippies.

What type of food did you grow in your garden?

Oh, everything that would grow in it. I was experimenting because I wasn’t used to the weather. The main thing with gardens was keeping the deer out of them. And we weren’t very good at that yet.  It took a few years of experience; but then my hubby was older than me and was not well, and I had a handicapped kid – so we found it a bit much and moved to town, sold a piece of that land.

Do you remember who taught you how to cook, and are there any family recipes that have been passed on?

What activities did you and your family do together?

What did you do for fun in the summer? Or in the winter?

When we were kids we were lucky. We had horses. My mum, when my dad died, she promised us that she would cut the hay and we’d help her make the hay, and we could have horses to ride, and so I lived in a wonderful place to have a horse – big open country with no fences, which is rare. It’s fenced now but it wasn’t then.

Are there any craft traditions that your parents taught you?

Knitting and sewing – my job was doing the sewing, while my two brothers played with machines and had fun!  And I had to sew the buttons on and fix the zippers and darn the socks. I used to be really good at darning socks, talk about a craft!  Then the socks didn’t wear out and that was heaven, heaven.

Does your family have any heirlooms that have been passed down?

Yes, all the good ones were given to… see, I was raised in England, right, and all the good ones were passed down to my nephews and nieces and my brothers and I went and got all the junk!  There’s a piece back there which we can look at. My grandpa was a carpenter of some quality. He was a boat builder and he loved carving stuff and making stuff new out of old stuff and interesting things he did.

You said your dad was a carpenter. Did your mum have any jobs at all?

No, my dad died when I was just a youngster… I was six, and my mum was a farmer and she had a little bit of land so, frankly, I worked with my mother. She decided that for the war effort she was going to plant a quarter of an acre of potatoes and it was up to me and my brothers to dig the field for a quarter of an acre for the war effort, THE POTATOES!

My mum was dedicated to hard work and religion. She was, for my whole childhood, the person who collected the money and help the Minister count the money.  There’s a name for people who do that. Church warden. Yes, that’s right.