Lake Trail School was built on the site of an old 160-acre farm homestead.  In 1992, the remaining lands were made into a permanent trust:  Morrison Nature Park.  We invited members of the Morrison family who had grown up on the farm to lead us on a walking tour of the area.  Sisters Maureen and Margeurite, and cousin Malcolm – along with Jim Palmer of Morrison Creek Streamkeepers – shared their memories of the neighbourhood and how the Trust was established.  We spent the first hour in the classroom, looking at aerial maps and family photos. All our tour guides showed the warmth and devotion of people who put a lot of care into preserving this area.

On a clear and crisp November day,  we set out on our sleuthing expedition to follow the path of the old mill flume, built by Reginald Pidcock in 1873 to divert water from Morrison Creek for powering his sawmill.  An army of volunteers dug a four mile long ditch, with elevated wooden flumes spanning the ravines, to flow water downhill to a six-acre mill pond on 8th Street  – a herculean feat, all in hopes of cheap access to planing lumber for houses and barns.  The property has been logged multiple times – at one time, it looked like a “sea of stumps, all the way up to Powerhouse Road”.   And in 1921, the flume was the subject of a lawsuit.  Below is a map depicting where the flume leaked water into the family farm. 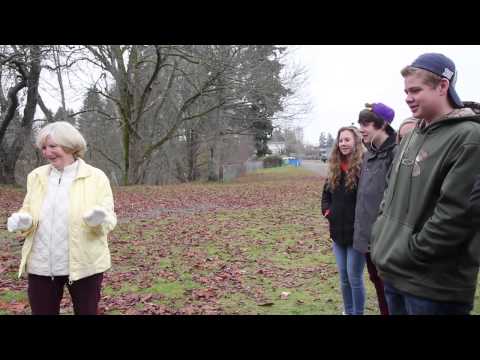 What was the story on the building of the flume?

Marguerite: Oh, with Pidcock, lots of volunteers then you know.  He had this flume built, dug in a lot of places, and they were all volunteers. They’d come with their shovels and picks. You know what a pick is?  They dug and built all the way down, because it meant they could get lumber cheaper

Jim:  They were all people trying to build houses and barns and stuff like that.

So, what would this flume do with the logs?

Marguerite: Oh, they wouldn’t do it with the logs. The logs came down the Tsolum River from where the camps were, and then joined into the Courtenay River.  And this water, the flume was from Morrison Creek.  Which used to be called Millard Creek.  There were two Millard Creeks…

Jim: Three, if you count the one at the bottom of Mount Washington.

Marguerite: There were Millards all over!  And they would bring that water down to the pond where the Arbutus is.

Jim: It was water to power the sawmill blade there.

Why wouldn’t they just use the water from the river that was right there?

Jim: Because there’s no energy to it there. You need falling water.

Marguerite: To turn the wheel.  And then you have to take out any obstructions, you have to cut through. There’s a lot of math involved to get the flow right and to get the right drop.

Sheila:  So we’ve got to put ourselves back in time when this was trees, paths and fields that had been cleared.  People were starting to build. And some of the houses, the one across the street just got taken down a little while ago.  Can you guys fathom a big mill pond right where Shoppers Drug Mart and the Pita Pit are?   It’s fun when you go to Europe, you can imagine yourself when they were building the Roman architecture over there. When you come here it’s difficult.

Jim: Except they built out of stone, which lasts centuries. Things here were all built out of wood and they rot really fast.  But then, a lot of structures, they actually moved whole towns. Like, when Bevan closed, they just moved all the houses out. There’s just a few foundations left.

Marguerite: A lot of the houses were built on skids so they could be dragged.

Jim: I built one on skids for myself.

Maureen: Going back, too, when our grandfather cleared this off he logged it right up to Puntledge Road.  My mother told me that often, because she was born here also.  She would walk over when she was a teenager and look right up to the Puntledge and it was all stumps. There were no trees.  So a lot of the trees you’re looking at now, how old are they? Imagine what it would have been like when our grandfather started clearing and logging off this section and then building here. That was a lot of work to get all those stumps out of there.

What kind of equipment did they have to pull the stumps?

Maureen: There, the trees are growing up through the stumps and the old stumps are still there.

Marguerite:  And our great grandfather, Henry McQuillan, he lived on Plateau Road.  There was an old farm there for quite a long time and now its developed.  I don’t know where you would find a real virgin timber in this area. The only place you might find real virgin timber is a bit at Cathedral Grove on the way to Port Alberni, they call it McMillan Park or something. Go walk through there and you’ll see some original virgin timber but very, very little. You’ll see lots of huge, huge trees but there are not virgin trees. They are second generation, or third or fourth.

Maureen: With the logging even today, they sink logs into a lake and ten years later they bring it up and they’re perfectly good, nothing wrong with them at all. They don’t absorb the water.  But in these conditions where the air is getting at it, some of them start to rot if there’s an imperfection. And once there’s a weak point, pretty soon it’s falling apart.  And the water was going over the field, which meant that our grandfather couldn’t plant anything there. It was ruined with all that water.  So this is a bit of the damage our grandfather was showing in the lawsuit against the City of Courtenay.

Jim:  Up in Morrison Park, there’s that high flat area – and the flume cut across, and started leaking. And the water started running down towards where Puntledge Elementary is now and causing all kinds of…

Marguerite: It didn’t go down as far as Puntledge Elementary.

Jim: In that general direction, though, going off to the side.  And erosion was happening down this way.

Margeurite:  But it was damaging this upper part – and you’re right, some of it would drop down, but you know how puddles start and get bigger and bigger.